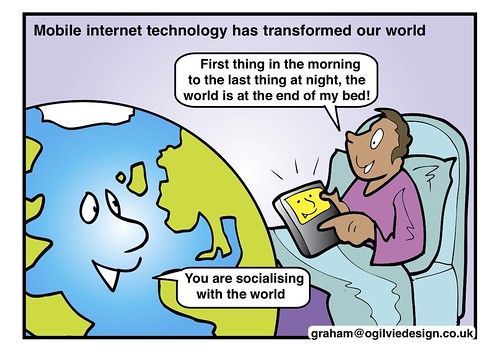 If you caught the most recent MRM’s Marketing Minute you’ll have seen me – freshly decorated with a sunburnt nose – blethering about the mobile internet on Brighton seafront.

The point I was attempting to make was about how short-sighted I believe it is to view the mobile internet as merely somewhere new to put your website.

You see, some people think all they need to do to ’embrace mobile’ is make their website look pretty on a smaller screen. As long as the content is good, the vehicle doesn’t matter, they say – erroneously.

It’s difficult to articulate a point like this very well in 60 seconds so I promised I’d expand on my argument – and I’m faithfully keeping that promise now.

The mobile and ‘desktop’ internets are utterly different beasts

The first thing to say is that the user’s experience on the mobile web is often completely different from his or her experience of the web on their laptop or desktop computer.

This is because smartphones and tablets use their ‘eyes’ (camera), ‘ears’ (mic) and GPS to gather information and to create content in ways that the ‘tethered web’ simply doesn’t allow. So, unlike the tethered internet, mobile is about so much more than consuming content.

In the same way that “content is king” on the web, “context is king” on mobile because users expect the content they are consuming – whether it’s a summary of house-prices, a ‘what’s on’ guide or a house paint catalogue – to relate in some way to his or her immediate surroundings, providing that context.

While mobile websites are a good first step – because it’s important that a website can be viewed on mobile – they don’t really meet the challenge of understanding how people interact with mobile devices.

In a second part to this blog (next week), I’ll set out some case studies of interesting uses of the mobile web in our area of work here at MRM – the financial sector.

But I’m going to end this first part by warning you that the mobile internet  is outpacing its tethered cousin at a rate no-one predicted and this cannot be ignored.

The mobile revolution has begun

Most businesses in 2011, especially financial services, are information businesses and they must understand that people are now mobile and that they want that information to follow them everywhere. The challenge is to empower customers with mobile information and customer service before rival brands do.

A huge uptake in usage of the mobile internet is being driven largely by the rise of smartphone devices.

According to very recent research:

The UK smartphone explosion has been spurred by both manufacturers and operators favouring phones increasingly using Google’s Android operating system. Previously, mobile media use was predominantly by owners of premium devices like Apple’s iPhone.

The financial services industry is catching on: almost every major bank across Europe now has a mobile internet presence.

So what? Mobile surfers matter the most in today’s ‘recommendations economy’ – that’s so what.

America’s respected Forrester research agency discovered something in 2010 that shocked the tech-world. It found that for every four paid advertising ‘impressions’ in the US, there was one unpaid impression by consumers – far higher than previously suspected (source here).

In other words, the noise of peer-to-peer conversation about brands was a quarter as loud as the advertising. This is significant because recent research by Nielsen shows that peer-to-peer influence is far, far more powerful than traditional advertising. So internet-using consumers clearly have a huge amount of influence.

This, of course, is only an argument for courting word-of-mouth recommendations in the social web – until one considers that mobile internet users are more influential than non-mobile web users.

According to Forrester, 20% of internet users are doing the 80% of the influencing and of half of that 20% are likely to be mobile internet users, compared to just 25% of all American internet users.

This table by Forrester shows how mobile use and influence correlate closely:

Be there – be everywhere – and you’ll be loved

Because they are influential, it follows that mobile web users are demanding when it comes to what their expectations are about how they interact with their favourite brands. They want to use their devices to do almost everything from ordering videos and taxis to reporting crimes and keeping an eye on their back gradens. It’s likely those mobile customers expect the companies they spend money with to be there on their mobile device when they want them, not just when the shops are open.

If you empower them with information as and when they need it, they will tell their friends how great you are. This is the opportunity/threat/challenge for every business with mobile internet-using customers.

Join us for Part Two

In the second part of this post, which we’ll publish here at MRM before April 22nd, we’ll tell you what you need to consider when designing your mobile strategy. And we’ll give you five or six case studies so you can see how businesses with successful mobile strategies are slaying the competition.

In the meantime, if you know of any interesting business uses of mobile, especially in financial services, – or if you think I’m talking nonsense, let us know by commenting below.

Michael Taggart is head of digital and social at MRM.